Planning and urban climate: the example of the metropolitan area of Barcelona 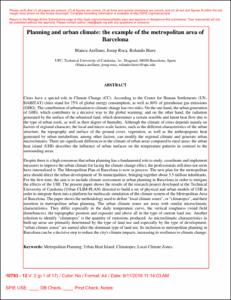 Document typeConference lecture
PublisherInternational Society for Photo-Optical Instrumentation Engineers (SPIE)
Rights accessOpen Access
Abstract
Cities have a special role in Climate Change (CC). According to the Center for Human Settlements (UNHABITAT) cities stand for 75% of global energy consumption, as well as 80% of greenhouse gas emissions (GHG). The contribution of urbanisation to climate change has two sides. On the one hand, the urban generation of GHG, which contributes in a decisive way to the global warming; and on the other hand, the radiation generated by the surface of the urbanised land, which determines a certain sensible and latent heat flow due to the type of urban roofs, as well as their degree of humidity. Although the climate of cities depends mainly on factors of regional character, the local and micro-scale factors, such as the different characteristics of the urban structure, the topography and surface of the ground cover, vegetation, as well as the anthropogenic heat generated by urban metabolism, among other factors, can modify the regional climate and generate urban microclimates. There are significant differences in the climate of urban areas compared to rural areas: the urban heat island (UHI) describes the influence of urban surfaces on the temperature patterns in contrast to the surrounding areas. Despite there is a high consensus that urban planning has a fundamental role to study, coordinate and implement measures to improve the urban climate for facing the climate change effect, the professionals still does not seem have internalized it. The Metropolitan Plan of Barcelona is now in process. The new plan for the metropolitan area should direct the urban development of 36 municipalities, bringing together about 3.5 million inhabitants. For the first time, the aim is to include climate assessment in urban planning in Barcelona in order to mitigate the effects of the UHI. The present paper shows the results of the research project developed at the Technical University of Catalonia (Urban CLIM-PLAN) directed to build a set of physical and urban models of UHI in order to integrate them into a platform for multiscale simulation of the climate system of the Metropolitan Area of Barcelona. The paper shows the methodology used to define
CitationArellano, Blanca, Roca, J., Biere, R.M. Planning and urban climate: the example of the metropolitan area of Barcelona. A: International Symposium on Remote Sensing. "SPIE Remote Sensing 2018". Washington: International Society for Photo-Optical Instrumentation Engineers (SPIE), 2018, p. 1-17.
URIhttp://hdl.handle.net/2117/127385
Publisher versionhttps://www.spiedigitallibrary.org/conference-proceedings-of-spie/browse/SPIE-Remote-Sensing/2018
Collections
Share: