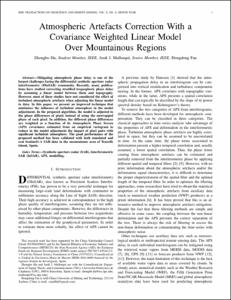 Fan, Hongdong
Document typeArticle
PublisherInstitute of Electrical and Electronics Engineers (IEEE)
Rights accessOpen Access
Abstract
Mitigating the atmospheric phase delay is one of the largest challenges faced by the differential synthetic aperture radar (SAR) interferometry community. Recently, many publications have studied correcting the stratified tropospheric phase delay by assuming a linear model between them and the topography. However, most of these studies have not considered the effect of turbulent atmospheric artifacts when adjusting the linear model to data. In this paper, we present an improved technique that minimizes the influence of the turbulent atmosphere in the model adjustment. In the proposed algorithm, the model is adjusted to the phase differences of pixels instead of using the unwrapped phase of each pixel. In addition, the different phase differences are weighted as a function of its atmospheric phase screen covariance estimated from an empirical variogram to reduce, in the model adjustment, the impact of pixel pairs with a significant turbulent atmosphere. The good performance of the proposed method has been validated with both the simulated and real Sentinel-1A SAR data in the mountainous area of Tenerife island, Spain.
Description
© 2018 IEEE. Personal use of this material is permitted. Permission from IEEE must be obtained for all other uses, in any current or future media, including reprinting/republishing this material for advertising or promotional purposes,creating new collective works, for resale or redistribution to servers or lists, or reuse of any copyrighted component of this work in other works.
CitationHu, Z., Mallorqui, J.J., Fan, H. Atmospheric artifacts correction with a covariance-weighted linear model over mountainous regions. "IEEE transactions on geoscience and remote sensing", 1 Desembre 2018, vol. 56, núm. 12, p. 6955-7008.
URIhttp://hdl.handle.net/2117/127382
DOI10.1109/TGRS.2018.2846885
ISSN0196-2892
Publisher versionhttps://ieeexplore.ieee.org/document/8412159
Collections
Share: