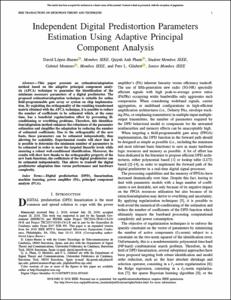 Document typeArticle
PublisherIEEE Microwave Theory and Techniques Society
Rights accessOpen Access
Abstract
This paper presents an estimation/adaptation method based on the adaptive principal component analysis (APCA) technique to guarantee the identification of the minimum necessary parameters of a digital predistorter. The proposed estimation/adaptation technique is suitable for online field-programmable gate array or system on chip implementation. By exploiting the orthogonality of the resulting transformed matrix obtained with the APCA technique, it is possible to reduce the number of coefficients to be estimated which, at the same time, has a beneficial regularization effect by preventing ill-conditioning or overfitting problems. Therefore, this identification/adaptation method enhances the robustness of the parameter estimation and simplifies the adaptation by reducing the number of estimated coefficients. Due to the orthogonality of the new basis, these parameters can be estimated independently, thus allowing for scalability. Experimental results will show that it is possible to determine the minimum number of parameters to be estimated in order to meet the targeted linearity levels while ensuring a robust well-conditioned identification. Moreover, the results will show how thanks to the orthogonality property of the new basis functions, the coefficients of the digital predistorter can be estimated independently. This allows to tradeoff the digital predistorter adaptation time versus performance and hardware complexity.
Description
©2018 IEEE. Personal use of this material is permitted. Permission from IEEE must be obtained for all other uses, in any current or future media, including reprinting/republishing this material for advertising or promotional purposes, creating new collective works, for resale or redistribution to servers or lists, or reuse of any copyrighted component of this work in other works.
CitationLópez, D., Pham, T., Montoro, G., Gilabert, P. L. Independent digital predistortion parameters estimation using adaptive principal component analysis. "IEEE transactions on microwave theory and techniques", 1 Gener 2018, vol. 66, núm. 12, p. 5771-5779.
URIhttp://hdl.handle.net/2117/127355
DOI10.1109/TMTT.2018.2870420
ISSN0018-9480
Publisher versionhttps://ieeexplore.ieee.org/document/8477164
Collections
Share: