EEG based volitional interaction with a robot to dynamically replan trajectories 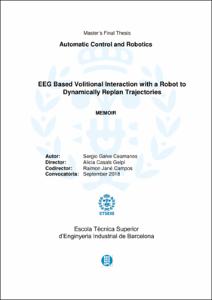 Everyday robots are more involved in our daily basis and they are expected to be part of the domestic environment eventually. Assertive robots deal with this scenario providing help to people with certain disabilities, a task that requires an intuitive communication between human and robot. One of the control methods that have become popular is the Brain Computer Interfaces (BCI), using electroencephalography (EEG) signals to read the user’s intention. Commonly applied to let the user choose among several options, without further interaction once the robot starts acting. This project explain a method to interpret the EEG signal online and use it to manipulate online the movement of a robot arm. The signal that is received comes from Motion Imagery to allow the user to communicate constantly his intention. Using Dynamic Movement Primitives (DMP) and Virtual Force Systems the stored trajectories of the robot can be modified online trying to adapt to the user’s will. With this elements the trajectories are applied in a real robot arm, chequing online if all the requested goals are feasible positions for the robot. This method intend to make more natural the collaboration with a robot in domestic tasks, where slight modifications of an action can lead into a more satisfactory interaction.
SubjectsRobots--Control systems, Electroencephalography, Robots -- Sistemes de control, Electroencefalografia
URIhttp://hdl.handle.net/2117/127353