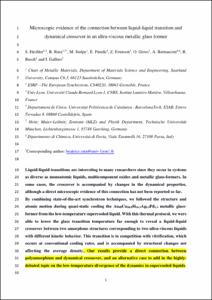 Liquid-liquid transitions are interesting to many researchers since they occur in systems as diverse as monoatomic liquids, multicomponent oxides, and metallic glass formers. In some cases, the crossover is accompanied by changes in the dynamical properties. By combining state-of-the-art synchrotron techniques, we followed the structure and atomic motion during quasistatic cooling of the Au49Cu26.9Si16.3Ag5.5Pd2.3 metallic glass former from the low-temperature supercooled liquid. With this thermal protocol, we were able to lower the glass transition temperature far enough to reveal a liquid-liquid crossover between two amorphous structures corresponding to two ultraviscous liquids with different kinetic behavior. This transition is in competition with vitrification, which occurs at conventional cooling rates, and is accompanied by structural changes not affecting the average density. Our results provide a direct connection between polyamorphism and dynamical crossover, and an alternative case to add to the highly debated topic on the low-temperature divergence of the dynamics in supercooled liquids.
CitationHechler , S., Ruta, B., Stolpe, M., Pineda, E., Evenson, Z., Gross, O., Bernasconi, A., Busch, R., Gallino, I. Microscopic evidence of the connection between liquid-liquid transition and dynamical crossover in an ultraviscous metallic glass former. "Physical review materials", 23 Agost 2018, vol. 2, núm. 8, p. 085603-1-085603-6.
URIhttp://hdl.handle.net/2117/127261
DOI10.1103/PhysRevMaterials.2.085603
ISSN2475-9953
Publisher versionhttps://journals.aps.org/prmaterials/abstract/10.1103/PhysRevMaterials.2.085603