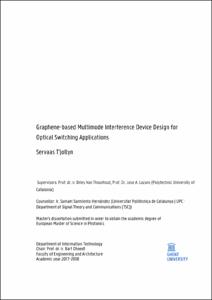 CovenanteeVrije Universiteit Brussel; Universiteit Gent
Document typeMaster thesis
Rights accessOpen Access
Abstract
The relatively small size and low energy consuming switching potential offered by graphene-based electro-optic and electro-absorption switches has attracted a lot of attention in the photonics community recently and there has been no research on integrating graphene on an MMI so far to my knowledge. In this work, I theoretically model an integrated electro-optic switch based on a Multimode Interferometer (MMI) coated with graphene for data communication purposes. By varying a voltage over a range of 16V across a bi-layer of graphene, the proposed MMI can be used as a 1x2 switch with a graphene interaction length of around 140μm. As such, this component achieves a 0.22V cm efficiency at λ= 1550 nm, which is in line with efficiencies of similar components. The MMI on itself, has low energy consumption and is intrinsically a low-loss component and thus the idea of using this proposed switch on a large scale in data communication as a splitter is not excluded.
SubjectsOptical fibers, Integrated optics, Graphene, Fibres òptiques, Òptica integrada, Grafè
URIhttp://hdl.handle.net/2117/127192
Collections
Share: