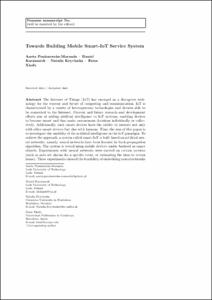 Document typeArticle
Rights accessOpen Access
Abstract
The Internet of Things (IoT) has emerged as a disruptive technology for the current and future of computing and communication. IoT is characterized by a variety of heterogeneous technologies and devices able to be connected to the Internet. Current and future research and development efforts aim at adding artificial intelligence to IoT systems, enabling devices to become smart and thus make autonomous decisions individually or collectively. Additionally, such smart devices have the ability to interact not only with other smart devices but also with humans. Thus, the aim of this paper is to investigate the usability of the artificial intelligence in the IoT paradigm. To achieve the approach, a system called smart-IoT is built based on artificial neural networks, namely, neural networks have been learned by back-propagation algorithm. The system is tested using mobile devices under Android as smart objects. Experiments with neural networks were carried on certain services (such as auto set alarms for a specific event, or estimating the time to return home). These experiments showed the feasibility of embedding neural networks techniques into the IoT system. The approach allows also for easy adding of new services, which in turn means that smart IoT is a modular and full-fledged system.
CitationPoniszewska-Maranda, A., Kaczmarek, D., Kryvinska, N., Xhafa, F. Studying usability of AI in the IoT systems/paradigm through embedding NN techniques into mobile smart service system. "Computing", Novembre 2019, vol. 101, no 11, p.1661–1685
URIhttp://hdl.handle.net/2117/127081
DOI10.1007/s00607-018-0680-z
ISSN0010-485X
Publisher versionhttps://link.springer.com/article/10.1007%2Fs00607-018-0680-z
Collections
Share: