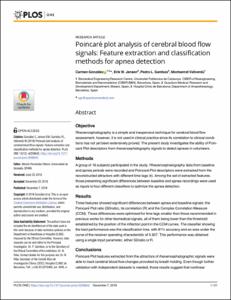 Document typeArticle
PublisherPublic Library of Science (PLOS)
Rights accessOpen Access
Abstract
Objective: Rheoencephalography is a simple and inexpensive technique for cerebral blood flow assessment, however, it is not used in clinical practice since its correlation to clinical conditions has not yet been extensively proved. The present study investigates the ability of Poincaré Plot descriptors from rheoencephalography signals to detect apneas in volunteers. Methods:A group of 16 subjects participated in the study. Rheoencephalography data from baseline and apnea periods were recorded and Poincaré Plot descriptors were extracted from the reconstructed attractors with different time lags (t). Among the set of extracted features, those presenting significant differences between baseline and apnea recordings were used as inputs to four different classifiers to optimize the apnea detection. Results:Three features showed significant differences between apnea and baseline signals: the Poincaré Plot ratio (SDratio), its correlation (R) and the Complex Correlation Measure (CCM). Those differences were optimized for time lags smaller than those recommended in previous works for other biomedical signals, all of them being lower than the threshold established by the position of the inflection point in the CCM curves. The classifier showing the best performance was the classification tree, with 81% accuracy and an area under the curve of the receiver operating characteristic of 0.927. This performance was obtained using a single input parameter, either SDratio or R. Conclusions Poincaré Plot features extracted from the attractors of rheoencephalographic signals were able to track cerebral blood flow changes provoked by breath holding. Even though further validation with independent datasets is needed, those results suggest that nonlinear analysis of rheoencephalography might be a useful approach to assess the correlation of cerebral impedance with clinical changes
CitationGonzález Pijuán, C., Jensen, E.W., Gambus, P.L., Vallverdu, M. Poincaré plot analysis of cerebral blood flow signals : feature extraction and classification methods for apnea detection. "PloS one", 7 Desembre 2018, vol. 13, núm. 12, p. 1-21.
URIhttp://hdl.handle.net/2117/127011
DOI10.1371/journal.pone.0208642
ISSN1932-6203
Publisher versionhttps://journals.plos.org/plosone/article?id=10.1371/journal.pone.0208642
Collections
Share: