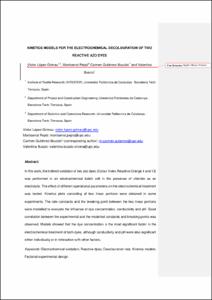 Document typeArticle
PublisherDesalination publications
Rights accessOpen Access
Abstract
In this work, the indirect oxidation of two azo dyes (Colour Index Reactive Orange 4 and 13) was performed in an electrochemical batch cell in the presence of chloride as an electrolyte. The effect of different operational parameters on the electrochemical treatment was tested. Kinetic plots consisting of two linear portions were obtained in some experiments. The rate constants and the breaking point between the two linear portions were modelled to evaluate the influence of dye concentration, conductivity and pH. Good correlation between the experimental and the modelled constants and breaking points was observed. Models showed that the dye concentration is the most significant factor in the electrochemical treatment of both dyes, although conductivity and pH were also significant either individually or in interaction with other factors.
CitationLopez-Grimau, V., Pepió, M., Gutierrez-Bouzán, C., Buscio, V. Kinetic models for the electrochemical decolouration of two reactive azo dyes. "Desalination and water treatment journal", 1 Desembre 2018, vol. 136, p. 405-412.
URIhttp://hdl.handle.net/2117/126983
DOI10.5004/dwt.2018.22901
ISSN1944-3986
Publisher versionhttp://www.deswater.com/vol.php?vol=136&oth=136|0|December%20|2018
Collections
Share: