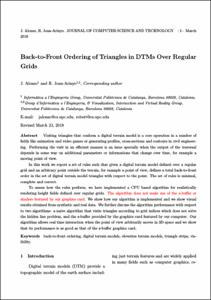 Except where otherwise noted, content on this work is licensed under a Creative Commons license : Attribution-NonCommercial-NoDerivs 3.0 Spain
Abstract
Visiting triangles that conform a digital terrain model is a core operation in a number of fields like animation and video games or generating profiles, cross-sections, and contours in civil engineering. Performing the visit in an efficient manner is an issue specially when the output of the traversal depends in some way on additional parameters or information changing over time, for example, a moving point of view. In this work we report a set of rules that, given a digital terrain model defined over a regular grid and an arbitrary point of view outside the terrain, define a total back-to-front order in the set of digital terrain model triangles with respect to the point. The set of rules is minimal, complete and correct. To assess how the rules perform, we have implemented a CPU-based algorithm for realistically rendering height fields defined over regular grids. The algorithm does not make use of the z-buffer or shaders featured by our graphics card. We show how our algorithm is implemented and show visual results obtained from synthetic and real data. We further discuss the algorithm performance with respect to two algorithms: a naive algorithm that visits triangles according to grid indices and does not solve the hidden line problem, and the z-buffer provided by the graphics card featured by our computer. Our algorithm allows real-time interaction when the point of view arbitrarily moves in 3D space and we show that its performance is as good as that of the z-buffer graphics card. © 2018, Springer Science+Business Media, LLC, part of Springer Nature.
CitationAlonso, J., Joan-Arinyo, R. Back-to-front ordering of triangles in digital terrain models over regular grids. "Journal of computer science and technology", 1 Novembre 2018, vol. 33, núm. 6, p. 1192-1203.
URIhttp://hdl.handle.net/2117/126959
DOI10.1007/s11390-018-1881-9
ISSN1000-9000
Publisher versionhttps://link.springer.com/article/10.1007%2Fs11390-018-1881-9
Collections
Share: