Avocado seed: A comparative study of antioxidant content and capacity in protecting oil models from oxidation 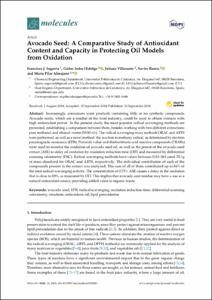 Except where otherwise noted, content on this work is licensed under a Creative Commons license : Attribution-NonCommercial-NoDerivs 3.0 Spain
Abstract
Increasingly, consumers want products containing little or no synthetic compounds. Avocado seeds, which are a residue of the food industry, could be used to obtain extracts with high antioxidant power. In the present study, the most popular radical scavenging methods are presented, establishing a comparison between them, besides working with two different extractions: pure methanol and ethanol–water (50:50 v/v). The radical scavenging assay methods ORAC and ABTS were performed, as well as a novel method: the reaction to methoxy radical, as determined by electron paramagnetic resonance (EPR). Peroxide value and thiobarbituric acid reactive compounds (TBARs) were used to monitor the oxidation of avocado seed oil, as well as the power of the avocado seed extract (ASE) to delay oil oxidation by oxidation induction time (OIT) and measured by differential scanning calorimetry (DSC). Radical scavenging methods have values between 1310–263 mol TE/g of mass dissolved for ORAC and ABTS, respectively. The individual contribution of each of the compounds present in the extract was analyzed. The sum of all of them contributed up to 84% of the total radical scavenging activity. The concentration of 0.75% ASE causes a delay in the oxidation that is close to 80%, as measured by OIT. This implies that avocado seed residue may have a use as a natural antioxidant source, providing added value to organic waste.
CitationSegovia, F., Hidalgo-Lopez, G.I., Villasante, J., Ramis, X., Almajano, M. P. Avocado seed: A comparative study of antioxidant content and capacity in protecting oil models from oxidation. "Molecules", 21 Setembre 2018, vol. 23, núm. 2421 (10), p. 1-14.
URIhttp://hdl.handle.net/2117/126946
DOI10.3390/molecules23102421
ISSN1420-3049
Publisher versionhttps://www.mdpi.com/1420-3049/23/10/2421
Collections
Share: