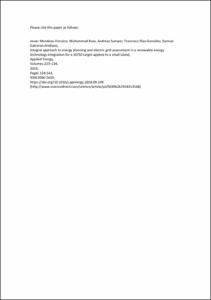 Except where otherwise noted, content on this work is licensed under a Creative Commons license : Attribution-NonCommercial-NoDerivs 3.0 Spain
Abstract
This paper presents an energy planning, a grid assessment, and an economic analysis, considering three growing scenarios (Low, Base and High) in the electricity consumption, to supply the energy demand for a hybrid power system (Photovoltaics/Wind/Diesel/Battery) on a small island by 2050. The main aim of this study is to present a methodology to optimize and reduce the backup time of the battery bank, included from the hybrid power generation system selected. Also, it will compare four di ff erent battery technologies, simultaneously, without changes in the renewable energy targets settled in 50% until 2050 and without changes in the safe continuous operation of the grid. The methodology includes a grid assessment analysis to obtain a reliable, strong and safe operation response based on the grid code parameters, even in case of disturbance. In the proposed methodology the analysis is developed on the basis of the use of two simulation model tools. The First simulation model tool determines the optimal values of variables that the system designer controls, such as the mix of components (Photovoltaics/Wind/Diesel/Battery) that make up the system and the size or quantity of each variable. This model uses the multiyear analysis based on a time-domain simulation run at the energy- fl ow level with discrete time-steps of 1 h. The Second simulation model tool assumes all the variables and parameters on the grid as constants during the period of the time analyzed. The power fl ow is analyzed through a programming language command script function and re fl ects the system response at a speci fi c time with given speci fi c variables and parameters. The fi nal technical proposal and its fi nancial analysis are obtained applying and validating this methodology on a small island, as well as, the selection of the system to be installed for the renewable electricity generation. The electric grid modi fi cations and reinforcements through the years until 2050, according to the grid code and the renewable energy targets settled for the island ’ s electric power system are included.
CitationMendoza, J., Raza, M., Sumper, A., Díaz-González, F., Galceran-Arellano, S. Integral approach to energy planning and electric grid assessment in a renewable energy technology integration for a 50/50 target applied to a small island. "Applied energy", 1 Gener 2019, vol. 233-234, núm. January, p. 524-543.
URIhttp://hdl.handle.net/2117/126933
DOI10.1016/j.apenergy.2018.09.109
ISSN0306-2619
Publisher versionhttps://www.sciencedirect.com/science/article/pii/S0306261918314168
Collections
Share: