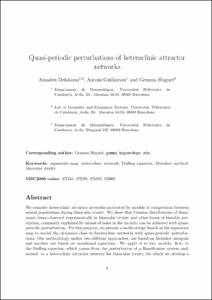 Document typeArticle
PublisherInstitute of Physics (IOP)
Rights accessOpen Access
Abstract
We consider heteroclinic attractor networks motivated by models of competition between neural populations during binocular rivalry. We show that gamma distributions of dominance times observed experimentally in binocular rivalry and other forms of bistable perception, commonly explained by means of noise in the models, can be achieved with quasiperiodic perturbations. For this purpose, we present a methodology based on the separatrix map to model the dynamics close to heteroclinic networks with quasiperiodic perturbations. Our methodology unifies two different approaches, one based on Melnikov integrals and the other one based on variational equations. We apply it to two models: first, to the Duffing equation, which comes from the perturbation of a Hamiltonian system and, second, to a heteroclinic attractor network for binocular rivalry, for which we develop a suitable method based on Melnikov integrals for non-Hamiltonian systems. In both models, the perturbed system shows chaotic behavior, while dominance times achieve good agreement with gamma distributions. Moreover, the separatrix map provides a new (discrete) model for bistable perception which, in addition, replaces the numerical integration of time-continuous models and, consequently, reduces the computational cost and avoids numerical instabilities
CitationDelshams, A., Guillamon, A., Huguet, G. Quasiperiodic perturbations of heteroclinic attractor networks. "Chaos : an interdisciplinary journal of nonlinear science", 1 Octubre 2018, vol. 28, núm. 10.
URIhttp://hdl.handle.net/2117/126922
DOI10.1063/1.5050081
ISSN1054-1500
Publisher versionhttps://aip.scitation.org/doi/10.1063/1.5050081
Collections
Share: