Common landscapes : the evolution of commons through the story of several Catalan productive landscapes 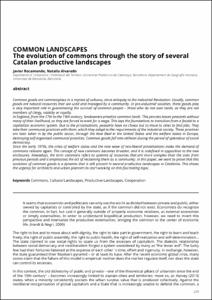 Alvaredo López, Natalia
Document typeConference report
PublisherEuropean Council of Landscape Architecture Schools (ECLAS)
Rights accessOpen Access
All rights reserved. This work is protected by the corresponding intellectual and industrial property rights. Without prejudice to any existing legal exemptions, reproduction, distribution, public communication or transformation of this work are prohibited without permission of the copyright holder
Abstract
Common goods are commonplace in a myriad of cultures, since antiquity to the Industrial Revolution. Usually, common goods are natural resources that are used and managed by a community. In pre-industrial societies, these goods play a very important role in guaranteeing the survival of common people – those who do not own lands, as they are not members of clergy, nobility or royalty. In England, from the 17th to the 19th century, landowners privatise common lands. This process leaves peasants without many of their livelihood, so they are forced to work for a wage. This lays the foundations to transition from a feudal to a capitalistic economic system. Due to the privatisations, peasants have no choice but to move to cities to find jobs. They take their communal practices with them, which they adapt to the requirements of the industrial society. These practices are later taken in by the public sector, through the New Deal in the United States and the welfare states in Europe, destroying self-organised communal practices. Common goods fall into oblivion during the period of splendour of social democracy. Since the early 1970s, the crisis of welfare states and the new wave of neo-liberal privatisations make the demand of commons relevant again. The concept of new commons becomes broader, and it is redefined in opposition to the new enclosures. Nowadays, the term commons refers to systems of resources that are more complex than the ones from previous periods and it emphasises the act of reclaiming them as a community. In this paper, we want to prove that this evolution of common goods is a dynamic that is still present in several productive landscapes in Catalonia. This shows the urgency for architects and urban planners to start working on this fascinating topic.
Location
1: Fonts del Llobregat, 08696 Castellar de n'Hug, Barcelona, Espanya
2: Delta del Llobregat, Barcelona, Espanya
CitationRocamonde, Javier, Alvaredo, N. Common landscapes : the evolution of commons through the story of several Catalan productive landscapes. A: International Scientific Conference. "Co-habitation tactics: imagining future spaces in architecture, city and landscape: TAW2018 International Scientific Conference from 20th to 23rd September 2018, POLIS University: conference proceedings". European Council of Landscape Architecture Schools (ECLAS), 2018, p. 229-234.
URIhttp://hdl.handle.net/2117/126759
ISBN978-9928-4459-6-4
Collections
Share: