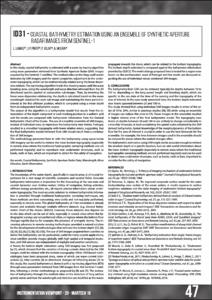 Show full item record
Lamas, L.
Pinto, J.P.
Vilar, P.
Moura, A.
Document typeArticle
PublisherSARTI
Rights accessOpen Access
Abstract
In this study, coastal bathymetry is estimated with a wave ray-tracing algorithm using wave parameters retrieved from Synthetic Aperture Radar (SAR) images acquired by the Sentinel-1 satellites. The method relies on the long swell wave’s detection by SAR imagery and the wave’s properties adjustment to the underwater topography, which can be mathematically related using the linear dispersion relation. The ray-tracing algorithm tracks the shoaling waves until the wave breaking zone, using the wavelength and wave direction retrieved from the 2D directional spectra applied at consecutive sub-images. Then, by inverting the linear wave dispersion relationship, the depth is calculated based on the mean wavelength obtained for each sub-image and maintaining the wave period retrieved at the first offshore position, which is computed using a mean depth from an independent bathymetric source. The output of the algorithm is a bathymetric model that results from the interpolation of the depth computed at each tracking position to a uniform grid and the results are compared with bathymetric information from the General Bathymetric Chart of the Ocean. The use of a monthly ensemble of SAR images, instead of individual ones, to reproduce the bathymetry near Aveiro, Portugal, resulted in a smoother topography with lower relative errors, suggesting that the final bathymetric model retrieved from SAR should result from a combination of SAR images. The methodology presented here to infer the bathymetry using space-borne SAR imagery can be useful to retrieve the mean bottom topography (especially in remote areas where the traditional hydrographic surveying methods are not performed regularly) and to reproduce new underwater structures, such as banks, reefs or bars, which are important to detect for the safety of navigation.
CitationLamas, L. [et al.]. Coastal bathymetry estimation using an ensemble of synthetic aperture radar images from Sentinel-1. A: 8th International Workshop on Marine Technology : MARTECH 2018. "Instrumentation Viewpoint". Vilanova i la Geltrú: SARTI, 2018, p. 47.
URIhttp://hdl.handle.net/2117/126545
DLB.32814-2006
ISSN1886-4864
Collections
Share: