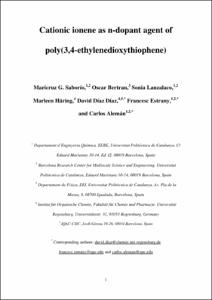 Document typeArticle
PublisherRoyal Society of Chemistry (RSC)
Rights accessOpen Access
Abstract
We report the reduction of poly(3,4-ethylenedioxythiophene) (PEDOT) films with a cationic 1,4-diazabicyclo[2.2.2]octane-based ionene bearing N,N0-(meta-phenylene)dibenzamide linkages (mPI). Our main goal is to obtain n-doped PEDOT using a polymeric dopant agent rather than small conventional tetramethylammonium (TMA), as is usual. This has been achieved using a three-step process, which has been individually optimized: (1) preparation of p-doped (oxidized) PEDOT at a constant potential of +1.40 V in acetonitrile with LiClO4 as the electrolyte; (2) dedoping of oxidized PEDOT using a fixed potential of 1.30 V in water; and (3) redoping of dedoped PEDOT applying a reduction potential of 1.10 V in water with mPI. The resulting films display the globular appearance typically observed for PEDOT, with mPI being structured in separated phases forming nanospheres or ultrathin sheets. This organization, which has been supported by atomistic molecular dynamics simulations, resembles the nanosegregated phase distribution observed for PEDOT p-doped with poly(styrenesulfonate). Furthermore, the doping level achieved using mPI as the doping agent is comparable to that achieved using TMA, even though ionene provides distinctive properties to the conducting polymer. For example, films redoped with mPI exhibit much more hydrophilicity than the oxidized ones, whereas films redoped with TMA are hydrophobic. Similarly, films redoped with mPI exhibit the highest thermal stability, while those redoped with TMA show thermal stability that is intermediate between those of the latter and the dedoped PEDOT. Overall, the incorporation of an mPI polycation as the n-dopant into PEDOT has important advantages for modulating the properties of this emblematic conducting polymer.
CitationSaborío, M., Bertran, O., Lanzalaco, S., Häring, M., Díaz-Díaz, D., Estrany, F., Aleman, C. Cationic ionene as an n-dopant agent of poly(3,4-ethylenedioxythiophene). "Physical chemistry chemical physics", 12 Març 2018, vol. 20, núm. 15, p. 9855-9864.
URIhttp://hdl.handle.net/2117/126425
DOI10.1039/c7cp07878a
ISSN1463-9076
Publisher versionhttp://pubs.rsc.org/en/content/articlelanding/2018/cp/c7cp07878a#!divAbstract
Collections
Share: