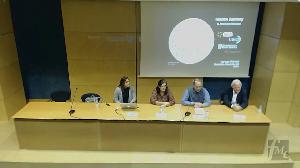 Networks are critical to understand human nature ---from genome to brain and society--- and our environment ---the Internet, food webs, international trade... ---, and are changing the way in which we model and predict complex systems in many different disciplines. Surprisingly, all complex networks talk a common language, regardless of their origin, and are imprinted with universal features. They are small-world, strongly clustered and hierarchical, modular, robust yet fragile, and may exhibit unexpected responses like cascades and other critical and extreme events. Many of these fundamental properties are well explained by a family of hidden metric space network models that led to the discovery that the latent geometry of many real networks is hyperbolic. Hyperbolicity emerges as a result of the combination of popularity and similarity dimensions into an effective distance between nodes, such that more popular and similar nodes have more chance to interact. The geometric approach permits the production of truly cartographic maps of real networks that are not only visually appealing, but enable applications like efficient navigation and the detection of communities of similar nodes. Recently, it has also enabled the introduction of a geometric renormalization group that unravels the multiple length scales coexisting in complex networks, strongly intertwined due to their small world property. Interestingly, real-world scale-free networks are self-similar when observed at the different resolutions unfolded by geometric renormalization, a property that might find its origin in an evolutionary drive. Practical applications of the geometric renormalization group for networks include high-fidelity downscaled network replicas, a multiscale navigation protocol in hyperbolic space that takes advantage of the increased navigation efficiency at higher scales, and many others.

M. Ángeles Serrano obtained her Ph.D. in Physics at the Universitat de Barcelona (UB) in 1999 with a thesis about gravitational wave detection. In 2000, she also received her Masters in Mathematics for Finance at the CRM-Universitat Autònoma de Barcelona. After four years in the private sector as IT consultant and mutual funds manager, Prof. Serrano returned to academia in 2004 to work in the field of Network Science. Subsequently, she was a researcher at Indiana University (USA), the École Polytechnique Fédérale de Lausanne (Switzerland), IFISC Institute (Spain), and held a Ramón y Cajal research associate appointment at UB until october 2015. The results of her investigations are summarized in major peer reviewed international scientific journals -including Nature, PNAS, PRL, ...-, book chapters, and conference proceedings. Prof. Serrano leads and participates in several research projects at the international and national levels. She is also actively involved in advising and research supervision. She serves in evaluation panels and program scientific committees, and acts as a reviewer in several international journals. In February 2009, she obtained the Outstanding Referee award of the American Physical Society. She is a Founder Member of Complexitat, the Catalan Network for the study of Complex Systems, and a Promoter Member of UBICS, the Universitat de Barcelona Institute of Complex Systems.
SubjectsStatistical mechanics, Mecànica estadística
URIhttp://hdl.handle.net/2117/126284