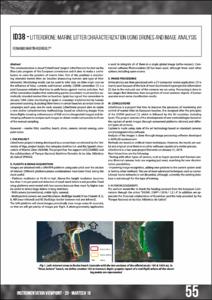 This communication is about “LitterDrone” project. LitterDrone is funded via the Blue-Labs program of the European commission and it aims to make a contribution to solve the problem of marine litter. Part of this problem is monitoring stranded marine litter on beaches (measuring number and type of litter elements). Monitoring results can be used to infer data on litter origin and on the influence of tides, currents and human activity. OSPAR convention [1] is a joint European initiative that tries to unify forces against marine pollution. Part of this convention implies that contracting parties (countries) must monitor periodically stranded marine litter on beaches. Spain has signed the convention in January 1994. Litter monitoring in Spain is nowadays implemented by human personnel counting (& picking) litter items in certain beaches at certain times (4 campaigns each year, one for each season). LitterDrone project aims to create a new and/or complementary methodology based on obtaining images from drone flights (creating orthomosaics of RGB and multiespectral images) and developing software to analyze such images to obtain results comparable to those of the manual sampling.