Design, manufacturing and set-up tests of a wave energy converter prototype in the context of the European Project LIFE-Demowave 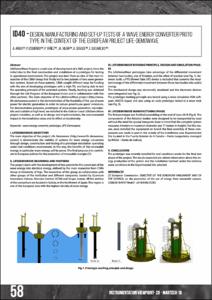 Show full item record
Arias, A.
Izquierdo, P.
Yañez, P.
Vilán, J.A.
Segade, A.
Casarejos, E.
Document typeArticle
PublisherSARTI
Rights accessOpen Access
Abstract
LifeDemoWave Project is a real case of development of a R&D project, from the initial idea to the final construction and installation of a prototype for testing in operational environment. This project was born from an idea of the main researcher of the CIMA Group that finally led to two patents of two wave generation systems. Based on these patents, CIMA sought different ways for funding with the aim of developing prototypes with a high TRL and being able to test the operating principle of the patented systems. Finally, funding was obtained through the Life Program of the European Union and in collaboration with five other partners. The main objective of the LifeDemoWave project (http://www. life-demowave.eu/en/) is the demonstration of the feasibility of the use of wave power for electric generation in order to reduce greenhouse gases' emissions. For demonstration purposes, prototypes of wave power generation, reproducible and scalable at high level, are installed in the Galician coast. LifeDemoWave project considers, as well as its design and implementation, the environmental impact in the installation areas and its effect on biodiversity.
Location
1: Praza José Mogimes, 36340 Nigrán, Pontevedra, Espanya
CitationArias, A. [et al.]. Design, manufacturing and set-up tests of a wave energy converter prototype in the context of the European Project LIFE-Demowave. A: 8th International Workshop on Marine Technology : MARTECH 2018. "Instrumentation Viewpoint". Vilanova i la Geltrú: SARTI, 2018, p. 58-59.
URIhttp://hdl.handle.net/2117/126264
DLB.32814-2006
ISSN1886-4864
Collections
Share: