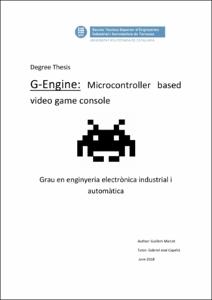 Document typeBachelor thesis
Rights accessOpen Access
Abstract
The objective of this project is to develop a functional portable videogame console for playing retro/arcade games that is capable of loading games from an SD card. For that, the device will be build around a stm32 microcontroller, specifically the stm32f103ZE. To accomplish this objective, this document will detail the operational processes that occur in the microcontroller, how to configure these processes, how to communicate with the development board and with other modules and how to program it. The same goes for the LCDs microcontroller and for the SD card interfaces and FAT32 file system. All this implies a good knowledge of the programming language C and the ability to find and understand reliable documentation. The console, named G-Engine, will be a portable device for playing arcade games. It will display the game on a 480x320 pixel resolution LCD, and the user will control it using its 8 input buttons: four directions buttons, two action buttons and the select and start buttons. G-Engine will be able to load games from an SD card making it so the user can have multiple games installed on the card and can change from one to another any time. It will implement the FAT32 file system so the games can be installed on the SD card from any PC by just “click and drag” the game into the card. To ensure portability the device has a 5200mAh Li-Ion battery that can be charged through a mini-USB connector. It will also have three battery status LEDs. One indicates low battery, other indicates that the device is being charged and the last indicates that the charge has finished. In order to reduce the power consumption the device has a power switch to disconnect the battery from the processor when the gaming session is over
SubjectsVideo games--Equipment and supplies, Video display terminals, Programming (Computers), Microcontrollers, Microprocessors, Terminals de pantalla de visualització, Videojocs, Microcontroladors, Microprocessadors
URIhttp://hdl.handle.net/2117/126254
Collections
Share: