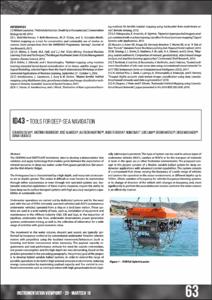 Except where otherwise noted, content on this work is licensed under a Creative Commons license : Attribution-NonCommercial-NoDerivs 3.0 Spain
Abstract
The SIDENAV and DEEPFLOAT innitiatives aims to develop a demonstrator that validates and apply technology that enables golds between the exploitation of mineral resources in deep-sea waters under Portuguese jurisdiction (for example the Mid-Atlantic Ridge). The Portuguese Sea is characterized by a high depth, and many natural resources are at depths greater. This makes it difficult or even hinders its exploitation through either autonomous or even through tele-operated systems use. Sustainable industrial exploitation of these marine resources require the ability to have deep sea to surface transport systems with high accuracy navigation capabilities at sustainable costs. Underwater operations are carried out by dedicated systems and for the most part with the use of ROVs (remotely operated vehicles) and AUV’s (autonomous underwater vehicles) operated from a ship or a land base station. These systems are used in a wide variety of tasks, such as, installation of equipment and maintenance in the offshore industry O&G (Oil and Gas), in the inspection of pipelines, underwater data lines, underwater observatories, power generation systems, underwater mining, as well as, the collection of information for a wide range of activities with great economic value. The movement in the water column, descent and ascent, are typically performed by buoyancy control or by conventional underwater thrusters (electric motors with propellers) using the localized movements/behaviours (such as hovering and faster manoeuvres) when necessary. The payload capacity requirements and task performance without the need for outside intervention, low power consumption and the high depth are very demanding. Based on the problem presented in the preceding paragraphs, the primary goal of the project is to develop hybrid variable ballast systems. In order to extend the range of possible operations to be held in high external pressure environments, reducing energy consumption by maximizing payload capacity and fine control in confined environments such as mining in mines with high groundwater levels (typically submerged operation). This type of system can be used in various types of underwater vehicles (AUV’s, Landers or ROV’s) or for the transport of materials or tools in the open sea or other freshwater environments. The proposed concept in this project consists of a flexible variable ballast system for deep underwater applications with advanced control capabilities. This system consists of a component that allows varying the buoyancy of a wide range of vehicles and systems for operation in the ocean environment, at different depths up to 1000m. Allows variation of buoyancy, for vehicles buoyancy trimming systems, or to change of direction of the vehicle with changes in buoyancy, and, more significantly to perform the ascend/descent motion control in the water column in an efficiently manner.
Location
1
CitationSilva, Eduardo [et al.]. Tools for deep-sea navigation. A: 8th International Workshop on Marine Technology : MARTECH 2018. "Instrumentation Viewpoint". Vilanova i la Geltrú: SARTI, 2018, p. 63.
URIhttp://hdl.handle.net/2117/126243
DLB.32814-2006
ISSN1886-4864
Collections
Share: