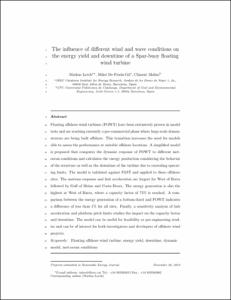 Document typeArticle
Rights accessOpen Access
Abstract
Floating offshore wind turbines (FOWT) have been extensively proven in model tests and are reaching currently a pre-commercial phase where large scale demonstrators are being built offshore. This transition increases the need for models able to assess the performance at suitable offshore locations. A simplified model is proposed that computes the dynamic response of FOWT to different met-ocean conditions and calculates the energy production considering the behavior of the structure as well as the downtime of the turbine due to exceeding operating limits. The model is validated against FAST and applied to three offshore sites. The motions response and hub acceleration are largest for West of Barra followed by Gulf of Maine and Costa Brava. The energy generation is also the highest at West of Barra, where a capacity factor of 75% is reached. A comparison between the energy generation of a bottom-fixed and FOWT indicates a difference of less than 1% for all sites. Finally, a sensitivity analysis of hub acceleration and platform pitch limits studies the impact on the capacity factor and downtime. The model can be useful for feasibility or pre-engineering studies and can be of interest for both investigators and developers of offshore wind projects.
CitationLerch, M., de Prada, M., Molins, C. The influence of different wind and wave conditions on the energy yield and downtime of a Spar-buoy floating wind turbine. "Renewable energy", Juny 2019, vol. 136, p. 1-14.
URIhttp://hdl.handle.net/2117/126242
DOI10.1016/j.renene.2018.12.096
ISSN0960-1481
Publisher versionhttps://www.sciencedirect.com/science/article/pii/S096014811831543X
Other identifiershttps://www.researchgate.net/publication/329995613_The_influence_of_different_wind_and_wave_conditions_on_the_energy_yield_and_downtime_of_a_Spar-buoy_floating_wind_turbine
Collections
Share: