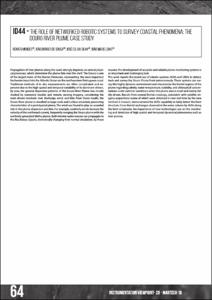 Propagation of river plumes along the coast strongly depends on several physical processes, which determine the plume fate over the shelf. The Douro is one of the largest rivers of the Iberian Peninsula, representing the most important freshwater input into the Atlantic Ocean on the northwestern Portuguese coast. Traditional methods of in situ measurements are often complicated and expensive due to the high spatial and temporal variability of its dominant drivers. By now, the general dispersion patterns of the Douro River Plume was mostly studied by numerical models and remote sensing imagery, considering the main drivers involved: river discharge, wind, and tide. From those results, the Douro River plume is classified as large-scale and surface-advected, presenting characteristics of a prototypical plume. The wind was found to play an essential role in the plume dispersion and fate. For example, southerly winds increase the velocity of the northward current, frequently merging the Douro plume with the northerly generated Minho plume. Both riverine water masses can propagate to the Rias Baixas (Spain), dramatically changing their normal circulation. By these reasons, the development of accurate and reliable plume monitoring systems is an important and challenging task. This work reports the recent use of robotic systems (AUVs and UAVs) to detect, track and survey the Douro Plume front autonomously. These systems can survey this highly dynamic environment and characterize the frontal regions of the plume regarding salinity, water temperature, turbidity, and chlorophyll concentrations under summer conditions when the plume area is small and mainly tidally driven. Results from several frontal crossings, coincident with satellite imagery acquisitions (some of which were obtained in near real-time by the new Sentinel-2 mission), demonstrated the AUVs capability to fairly detect the front structure. Cross-frontal exchanges observed in the water column by AUVs along the front emphasize the importance of new technologies use on the monitoring and detection of high spatial and temporal dynamical phenomena such as river plumes.