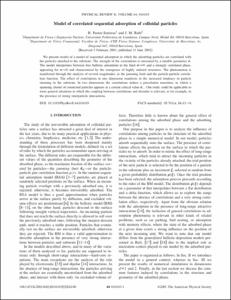 Except where otherwise noted, content on this work is licensed under a Creative Commons license : Attribution-NonCommercial-NoDerivs 3.0 Spain
Abstract
We present results of a model of sequential adsorption in which the adsorbing particles are correlated with the particles attached to the substrate. The strength of the correlations is measured by a tunable parameter s. The model interpolates between free ballistic adsorption in the limit ¿s8 and a strongly correlated phase, appearing for ¿s0 and characterized by the emergence of highly ordered structures. The phenomenon is manifested through the analysis of several magnitudes, as the jamming limit and the particle-particle correlation function. The effect of correlations in one dimension manifests in the increased tendency to particle chaining in the substrate. In two dimensions the correlations induce a percolation transition, in which a spanning cluster of connected particles appears at a certain critical value sc. Our study could be applicable to more general situations in which the coupling between correlations and disorder is relevant, as for example, in the presence of strong interparticle interactions.
CitationPastor-Satorras, R., Rubí, J. M. Model of correlated sequential adsorption of colloidal particles. "Physical review E, statistical physics, plasmas, fluids, and related interdisciplinary topics", 11 Juny 2001, vol. 64, núm. 1, p. 1-5.
URIhttp://hdl.handle.net/2117/126192
DOI10.1103/PhysRevE.64.016103
ISSN1063-651X
Publisher versionhttps://journals.aps.org/pre/abstract/10.1103/PhysRevE.64.016103
Collections
Share: