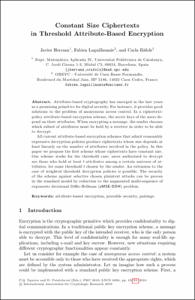 Except where otherwise noted, content on this work is licensed under a Creative Commons license : Attribution-NonCommercial-NoDerivs 3.0 Spain
Abstract
Attribute-based cryptography has emerged in the last years as a promising primitive for digital security. For instance, it provides good solutions to the problem of anonymous access control. In a ciphertextpolicy attribute-based encryption scheme, the secret keys of the users depend on their attributes. When encrypting a message, the sender chooses which subset of attributes must be held by a receiver in order to be able to decrypt. All current attribute-based encryption schemes that admit reasonably expressive decryption policies produce ciphertexts whose size depends at least linearly on the number of attributes involved in the policy. In this paper we propose the first scheme whose ciphertexts have constant size. Our scheme works for the threshold case: users authorized to decrypt are those who hold at least t attributes among a certain universe of attributes, for some threshold t chosen by the sender. An extension to the case of weighted threshold decryption policies is possible. The security of the scheme against selective chosen plaintext attacks can be proven in the standard model by reduction to the augmented multi-sequence of exponents decisional Diffie-Hellman (aMSE-DDH) problem.
CitationHerranz, J.; Laguillaumie, F.; Rafols, C. Constant size ciphertexts in threshold attribute-based encryption. A: International Conference on Practice and Theory in Public Key Cryptography. "13th International Conference on Practice and Theory in Public Key Cryptography". París: Springer Verlag, 2010, p. 19-34.
URIhttp://hdl.handle.net/2117/12612
DOI10.1007/978-3-642-13013-7_2
Publisher versionhttp://www.springerlink.com/content/7850364500160570/
Collections
Share: