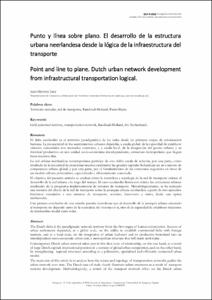 The Dutch delta is the paradigmatic network territory from the first stages of human colonization. Success of urban settlements depended, at a global scale, on the ability to establish commercial links with foreign markets, and at a local scale, on the integration of urban harbours and its productive hinterland into an interdependent socio-economic urban unit, a metropolitan structure that will reach until today. Contemporary Dutch urban network takes part in this dual scale of relationship, on the one hand, as a result of large Dutch capitals international position in a context of global urban competition, and on the other hand, by strengthening regional structures according to a polycentric, specialized and efficiently connected urban model. The main aim of this article is to analyze how the nature and topology of transportation networks guides the urban network over time. The Dutch case of study clearly illustrates urban structures as a result of transport systems development. Methodologically, a review of the transport network effect on the Dutch urban hierarchy has been made from three historical episodes linked to three transport systems: aquatic, railway, and road; from a multi-scale vision. In conclusion, the development of urban hierarchy oriented to transport does not depend so much on the nature of the system itself, but on the capacity to establish modal interchange relationships between transport and urban networks.