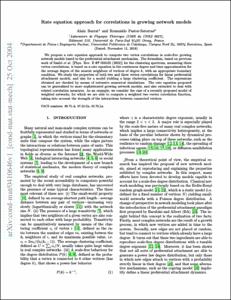 Document typeArticle
Rights accessOpen Access
Abstract
We propose a rate equation approach to compute two vertex correlations in scale-free growing network models based on the preferential attachment mechanism. The formalism, based on previous work of Szabó et al. [Phys. Rev. E. 67, 056102 (2002)] for the clustering spectrum, measuring three vertex correlations, is based on a rate equation in the continuous degree and time approximation for the average degree of the nearest neighbors of vertices of degree k, with an appropriate boundary condition. We study the properties of both two and three vertex correlations for linear preferential attachment models, and also for a model yielding a large clustering coefficient. The expressions obtained are checked by means of extensive numerical simulations. The rate equation proposed can be generalized to more sophisticated growing network models, and also extended to deal with related correlation measures. As an example, we consider the case of a recently proposed model of weighted networks, for which we are able to compute a weighted two vertex correlation function, taking into account the strength of the interactions between connected vertices.
CitationBarrat, A., Pastor-Satorras, R. Rate equation approach for correlations in growing network models. "Physical review E: statistical, nonlinear, and soft matter physics", 22 Març 2005, vol. 71, núm. 3, p. 036127-1-036127-13.
URIhttp://hdl.handle.net/2117/125865
DOI10.1103/PhysRevE.71.036127
ISSN1539-3755
Publisher versionhttps://journals.aps.org/pre/abstract/10.1103/PhysRevE.71.036127
Collections
Share: