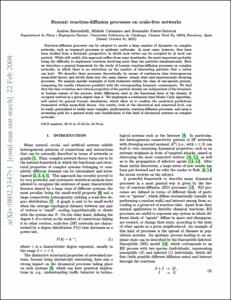 Document typeArticle
Rights accessOpen Access
Abstract
Reaction-diffusion processes can be adopted to model a large number of dynamics on complex networks, such as transport processes or epidemic outbreaks. In most cases, however, they have been studied from a fermionic perspective, in which each vertex can be occupied by at most one particle. While still useful, this approach suffers from some drawbacks, the most important probably being the difficulty to implement reactions involving more than two particles simultaneously. Here we develop a general framework for the study of bosonic reaction-diffusion processes on complex networks, in which there is no restriction on the number of interacting particles that a vertex can host. We describe these processes theoretically by means of continuous-time heterogeneous mean-field theory and divide them into two main classes: steady-state and monotonously decaying processes. We analyze specific examples of both behaviors within the class of one-species processes, comparing the results (whenever possible) with the corresponding fermionic counterparts. We find that the time evolution and critical properties of the particle density are independent of the fermionic or bosonic nature of the process, while differences exist in the functional form of the density of occupied vertices in a given degree class k. We implement a continuous-time Monte Carlo algorithm, well suited for general bosonic simulations, which allows us to confirm the analytical predictions formulated within mean-field theory. Our results, at both the theoretical and numerical levels, can be easily generalized to tackle more complex, multispecies, reaction-diffusion processes and open a promising path for a general study and classification of this kind of dynamical systems on complex networks.
CitationBaronchelli, A., Catanzaro, M., Pastor-Satorras, R. Bosonic reaction-diffusion processes on scale-free networks. "Physical review E: statistical, nonlinear, and soft matter physics", 23 Juliol 2008, vol. 78, núm. 1, p. 016111-1-016111-14.
URIhttp://hdl.handle.net/2117/125849
DOI10.1103/PhysRevE.78.016111
ISSN1539-3755
Publisher versionhttps://journals.aps.org/pre/abstract/10.1103/PhysRevE.78.016111
Collections
Share: