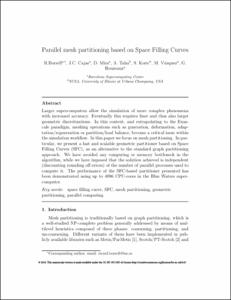 Document typeArticle
PublisherElsevier
Rights accessOpen Access
European Commission's projectHPC4E - HPC for Energy (EC-H2020-689772)
PRACE-4IP - PRACE 4th Implementation Phase Project (EC-H2020-653838)
Abstract
Larger supercomputers allow the simulation of more complex phenomena with increased accuracy. Eventually this requires finer and thus also larger geometric discretizations. In this context, and extrapolating to the Exascale paradigm, meshing operations such as generation, deformation, adaptation/regeneration or partition/load balance, become a critical issue within the simulation workflow. In this paper we focus on mesh partitioning. In particular, we present a fast and scalable geometric partitioner based on Space Filling Curves (SFC), as an alternative to the standard graph partitioning approach. We have avoided any computing or memory bottleneck in the algorithm, while we have imposed that the solution achieved is independent (discounting rounding off errors) of the number of parallel processes used to compute it. The performance of the SFC-based partitioner presented has been demonstrated using up to 4096 CPU-cores in the Blue Waters supercomputer.
CitationBorrell, R. [et al.]. Parallel mesh partitioning based on space filling curves. "Computers & Fluids", Setembre 2018, vol. 173, p. 264-272.
URIhttp://hdl.handle.net/2117/125789
DOI10.1016/j.compfluid.2018.01.040
ISSN0045-7930
Publisher versionhttps://www.sciencedirect.com/science/article/abs/pii/S0045793018300446
Collections
Share: