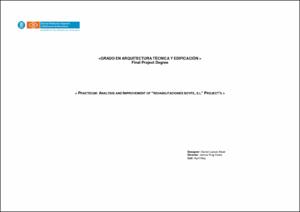 CovenanteeRehabilitaciones Boyfe
Document typeBachelor thesis
Rights accessOpen Access
All rights reserved. This work is protected by the corresponding intellectual and industrial property rights. Without prejudice to any existing legal exemptions, reproduction, distribution, public communication or transformation of this work are prohibited without permission of the copyright holder
Abstract
The objective of the following work is, on the one hand, to explain the work I’m doing in “Rehabilitaciones y promociones Boyfe, S.L.” and, on the other hand, to carry out a critical analysis and search for possible improvements in three of its projects. “Rehabilitaciones y promociones Boyfe, S.L.” is a company dedicated to the interior reform in a generalized manner, both with its own projects (direct contact with the client without interior designers, technicians, or any other intermediary), and projects that come to us through architecture firms, liberal professionals, etc. Therefore, the final objective is to change or adapt the interior space of the Project we’re carrying out. I started working in “Rehabilitaciones y promociones Boyfe, S.L.” in May 2017, and I’m still doing it. At the beginning, my work consisted of drawing plans and renders of project that had already started, but after one month, I started to, independently, make new projects that arrived to the company. In the successive months, I’ve been learning to direct a building site, from dealing with industrials to dealing with operators and clients. Nowadays, I combine the work of office with the one on the building site, performing all kinds of tasks of support and direction on site, as well as in the realization of projects. The three projects I’ve chosen have very different shapes, being very different between them, which increase the interest at the time of finding different design and practices solution. Sant Gervasi de Cassoles’ project is the typical squared floor, in which we can find a little corridor zone and a great comfort to the user. Passeig de Sant Gervasi, on the other hand, has triangular-shaped floor plan, very disintegrated and complicated to distribute. Ronda General Mitre project is a large housing in which there is no other alternative that leave the corridor for its circulation
SubjectsHousing rehabilitation, Buildings -- Repair and reconstruction, Rehabilitació de l'habitatge -- Catalunya -- Barcelona, Edificis -- Remodelació -- Catalunya -- Barcelona
DegreeGRAU EN ARQUITECTURA TÈCNICA I EDIFICACIÓ (Pla 2015)
Location
1: Ronda del General Mitre, 129, 08022 Barcelona, Espanya
URIhttp://hdl.handle.net/2117/125715
Collections
Share: