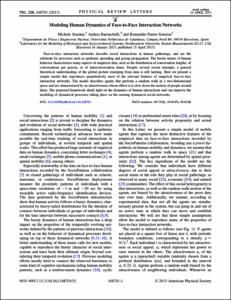 Document typeArticle
PublisherAmerican Institute of Physics (AIP)
Rights accessOpen Access
Abstract
Face-to-face interaction networks describe social interactions in human gatherings, and are the substrate for processes such as epidemic spreading and gossip propagation. The bursty nature of human behavior characterizes many aspects of empirical data, such as the distribution of conversation lengths, of conversations per person, or of interconversation times. Despite several recent attempts, a general theoretical understanding of the global picture emerging from data is still lacking. Here we present a simple model that reproduces quantitatively most of the relevant features of empirical face-to-face interaction networks. The model describes agents that perform a random walk in a two-dimensional space and are characterized by an attractiveness whose effect is to slow down the motion of people around them. The proposed framework sheds light on the dynamics of human interactions and can improve the modeling of dynamical processes taking place on the ensuing dynamical social networks.
CitationStarnini, M., Baronchelli, A., Pastor-Satorras, R. Modeling human dynamics of face-to-face interaction networks. "Physical review letters", 15 Abril 2013, vol. 110, núm. 16, p. 168701-1-168701-5.
URIhttp://hdl.handle.net/2117/125711
DOI10.1103/PhysRevLett.110.168701
ISSN0031-9007
Publisher versionhttps://journals.aps.org/prl/abstract/10.1103/PhysRevLett.110.168701
Collections
Share: