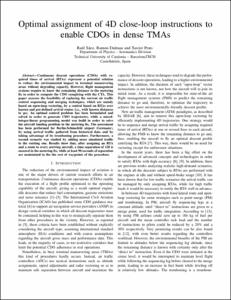 Continuous descent operations (CDOs) with required times of arrival (RTAs) represent a potential solution to reduce the environmental impact in terminal maneuvering areas without degrading capacity. However, flight management systems require to know the remaining distance to the metering fix in order to compute the CDO complying with the CTA. This paper assesses the feasibility of replacing the current air traffic control sequencing and merging techniques, which are mainly based on open-loop vectoring, by a control based on RTAs over known and pre-defined arrival routes (i.e., with known distances to go). An optimal control problem has been formulated and solved in order to generate CDO trajectories, while a mixed-integer-linear programming model was build in order to solve the aircraft landing problem in the metering fix. The assessment has been performed for Berlin-Schonefeld airport (Germany), by using arrival traffic gathered from historical data and by taking advantage of its tromboning procedure. Furthermore, a second scenario was studied by adding more simulated traffic to the existing one. Results show that, after assigning an RTA and a route to every arriving aircraft, a time separation of 120 is ensured in the metering fix, while at least 90 seconds of separation are maintained in the the rest of waypoints of the procedure.

© 2018 IEEE. Personal use of this material is permitted. Permission from IEEE must be obtained for all other uses, in any current or future media, including reprinting/republishing this material for advertising or promotional purposes, creating new collective works, for resale or redistribution to servers or lists, or reuse of any copyrighted component of this work in other works.