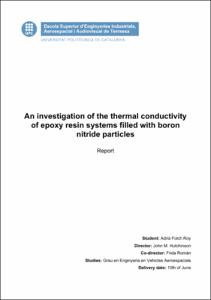 Epoxy composites containing boron nitride (BN) particles of different sizes, different combinations and different quantities have been studied with a view to obtaining an increased thermal conductivity. To investigation consists of two aspects: the analysis of the cure kinetics and the measurement of the thermal conductivity of the cured composites. The cure kinetics of the different samples has been studied using differential scanning calorimetry (DSC) for all different systems. It has been used up to a 70% of weight of boron nitride as a filler with more of this quantity made the mixture hardly manipulable. For these systems, it has been noticed that the effect of filler on peak temperature measured by DSC in general it increases as the system contains more boron nitride. Later results showed that a strong relationship between the peak temperature and the thermal conductivity of the cured sample existed. On the other hand, hybrid composites showed a decrease on the thermal conductivity when it was expected an improvement, that only came through adding more boron nitride to the sample and not for the combination itself. The dual cure process showed promising results that are going to lead for further development in this line as it is seen that first stage cured sample provide ease of processability.

The principal objective of this TFG is to investigate the enhancement of the thermal conductivity of an epoxy-thiol system by the incorporation of boron nitride (BN) particles in the epoxy matrix. Two approaches will be used: (i) the use of two different types of BN particles, namely platelets with average particle size 2 microns, and aggregates with average size 80 microns; and (ii) the use of dual cure procedures, the first stage cure taking place in an off-stoichiometric system and the second stage cure occurring by homopolymerisation. If time permits, a further objective would be to investigate the effect of mechanical modification of the particle distribution after the first stage of the cure.
SubjectsEpoxy resins--Testing, Thermal conductivity, Boron nitride, Resines epoxídiques -- Proves, Resines epoxídiques -- Propietats tèrmiques
URIhttp://hdl.handle.net/2117/125653