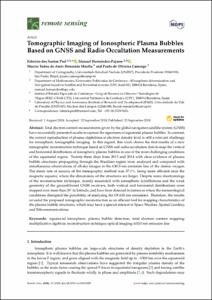 Total electron content measurements given by the global navigation satellite system (GNSS) have successfully presented results to capture the signatures of equatorial plasma bubbles. In contrast, the correct reproduction of plasma depletions at electron density level is still a relevant challenge for ionospheric tomographic imaging. In this regard, this work shows the first results of a new tomographic reconstruction technique based on GNSS and radio-occultation data to map the vertical and horizontal distributions of ionospheric plasma bubbles in one of the most challenging conditions of the equatorial region. Twenty-three days from 2013 and 2014 with clear evidence of plasma bubble structures propagating through the Brazilian region were analyzed and compared with simultaneous observations of all-sky images in the 630.0 nm emission line of the atomic oxygen. The mean rate of success of the tomographic method was 37.1%, being more efficient near the magnetic equator, where the dimensions of the structures are larger. Despite some shortcomings of the reconstruction technique, mainly associated with ionospheric scintillations and the weak geometry of the ground-based GNSS receivers, both vertical and horizontal distributions were mapped over more than 30° in latitude, and have been detected in instances where the meteorological conditions disrupted the possibility of analyzing the OI 630 nm emissions. Therefore, the results revealed the proposed tomographic reconstruction as an efficient tool for mapping characteristics of the plasma bubble structures, which may have a special interest in Space Weather, Spatial Geodesy, and Telecommunications.
CitationProl, F., Hernandez, M., Honorato, M., Camargo, P. Tomographic imaging of ionospheric plasma bubbles based on GNSS and radio occultation measurements. "Remote sensing", 1 Octubre 2018, vol. 10, núm. 10, p. 1-16.
URIhttp://hdl.handle.net/2117/125602
DOI10.3390/rs10101529
ISSN2072-4292
Publisher versionhttps://www.mdpi.com/2072-4292/10/10/1529