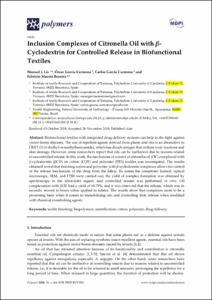 Except where otherwise noted, content on this work is licensed under a Creative Commons license : Attribution 3.0 Spain
Abstract
Biofunctional textiles with integrated drug-delivery systems can help in the fight against vector-borne diseases. The use of repellent agents derived from plants and oils is an alternative to DEET (N,N-diethyl-m-methylbenzamide), which has disadvantages that include toxic reactions and skin damage. However, some researchers report that oils can be ineffective due to reasons related to uncontrolled release. In this work, the mechanism of control of citronella oil (OC) complexed with b-cyclodextrin (bCD) on cotton (COT) and polyester (PES) textiles was investigated. The results obtained reveal that finishing cotton and polyester with b-cyclodextrin complexes allows for control of the release mechanism of the drug from the fabric. To assess the complexes formed, optical microscopy, SEM, and FTIR were carried out; the yield of complex formation was obtained by spectroscopy in the ultraviolet region; and controlled release was performed in vitro. Oil complexation with bCD had a yield of 63.79%, and it was observed that the release, which was in seconds, moved to hours when applied to fabrics. The results show that complexes seem to be a promising basis when it comes to immobilizing oils and controlling their release when modified with chemical crosslinking agents
CitationLis, M., García Carmona, O., García Carmona, C., Bezerra, F. Inclusion complexes of citronella oil with ß-Cyclodextrin for controlled release in biofunctional textiles. "Polymers", 29 Novembre 2018, vol. 10, núm. 12, p. 1324-1-1324-14.
URIhttp://hdl.handle.net/2117/125546
DOI10.3390/polym10121324
ISSN2073-4360
Publisher versionhttps://www.mdpi.com/2073-4360/10/12/1324
Collections
Share: