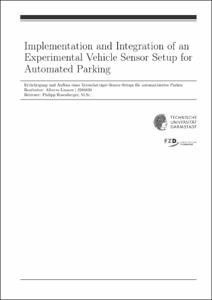 CovenanteeTechnische Universität Darmstadt
Document typeBachelor thesis
Rights accessOpen Access
Abstract
This thesis has been realized for the automotive engineering department of the TU-Darmstadt University. This department is currently carrying out research in the field of sensor modeling to support autonomous driving. During this thesis the main objective is the rear sensors Bosch parkpilot URF7 implementation and integration, using the methodology described by the thesis. Besides, part of the results obtained have been used for the modeling of ultrasonic sensors for valet parking use cases. The thesis is divided in different stages. First of all, a documented bibliographic search will be carried out on the ultrasonic sensors general operation and the different most important technical specifications of an ultrasonic sensor in the field of the automotive industry as well. Among them are: the field of view, detectable objects distance ranges and accuracy of the measurement. Once the necessary information for the thesis has been obtained, the Bosch Parkpilot URF7 has been used and the different tests previously described in the methodology research have been elaborated. Besides, imparting of the initial methodology extra tests have been made based on the calculation of the distance between sensor and object in real time. It should be noted that all these tests have been run without the sensor setup installation in the car. In contrast, the position and orientation of the sensors has been fixed as in the institutes test vehicle, Honda Accord, thanks to a movable platform. Once the system has been installed and powered with an external power supply, the basic functionality as an user level has been checked, in other words, the system calibration and the operating mode. To get a better understanding of the operation, the board that controls the Bosch sensor setup has been examined. The actual functioning of the existing hardware could not be found successfully due to the lack of information from the manufacturers. However, it is known the existence of a communication between sensors and the control unit, so that, with the realization of different tests and observing its signal with a DAQ, the signals can be read an processed. Once the operation of this Bus has been checked, the different experiments are performed to determine some technical specifications of the sensors: the field of vision (both of a sensor and of the entire sensor setup), the distance range in which a object can be detected, the operation of the cross echo and the accuracy in the measurement. Finally, with an Arduino UNO the signal of the communication bus has been processed to obtain the distance to an object as accurate as possible in real time. In addition, the sensitivity of the results obtained with the Arduino will also be determined.
SubjectsAutomobiles, Ultrasonic waves, Motor vehicles, Automòbils, Ultrasons, Vehicles de motor
DegreeGRAU EN ENGINYERIA DE SISTEMES ELECTRÒNICS (Pla 2009)
URIhttp://hdl.handle.net/2117/125497
Collections
Share: