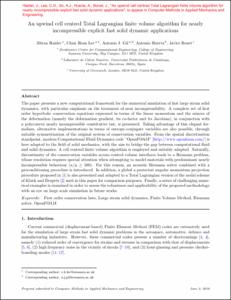 Document typeArticle
Rights accessOpen Access
Abstract
The paper presents a new computational framework for the numerical simulation of fast large strain solid dynamics, with particular emphasis on the treatment of near incompressibility. A complete set of first order hyperbolic conservation equations expressed in terms of the linear momentum and the minors of the deformation (namely the deformation gradient, its co-factor and its Jacobian), in conjunction with a polyconvex nearly incompressible constitutive law, is presented. Taking advantage of this elegant formalism, alternative implementations in terms of entropy-conjugate variables are also possible, through suitable symmetrisation of the original system of conservation variables. From the spatial discretisation standpoint, modern Computational Fluid Dynamics code “OpenFOAM” [http://www.openfoam.com/] is here adapted to the field of solid mechanics, with the aim to bridge the gap between computational fluid and solid dynamics. A cell centred finite volume algorithm is employed and suitably adapted. Naturally, discontinuity of the conservation variables across control volume interfaces leads to a Riemann problem, whose resolution requires special attention when attempting to model materials with predominant nearly incompressible behaviour (). For this reason, an acoustic Riemann solver combined with a preconditioning procedure is introduced. In addition, a global a posteriori angular momentum projection procedure proposed in Haider et al. (2017) is also presented and adapted to a Total Lagrangian version of the nodal scheme of Kluth and Després (2010) used in this paper for comparison purposes. Finally, a series of challenging numerical examples is examined in order to assess the robustness and applicability of the proposed methodology with an eye on large scale simulation in future works.
CitationHaider, J., Lee, C. H., Gil, A., Huerta, A., Bonet, J. An upwind cell centred Total Lagrangian finite volume algorithm for nearly incompressible explicit fast solid dynamic applications. "Computer methods in applied mechanics and engineering", 1 Octubre 2018, vol. 340, p. 684-727.
URIhttp://hdl.handle.net/2117/125487
DOI10.1016/j.cma.2018.06.010
ISSN0045-7825
Publisher versionhttps://www.sciencedirect.com/science/article/pii/S0045782518303086
Collections
Share: