Characterization, development and experimental validation of a dynamic model of an open cathode PEM fuel cell 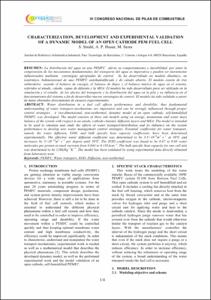 Except where otherwise noted, content on this work is licensed under a Creative Commons license : Attribution-NonCommercial-NoDerivs 3.0 Spain
Abstract
Water distribution in a fuel cell affects performance and durability, thus fundamental understanding of water transport mechanisms are imperative and can be strongly influenced through proper control strategies. A two-dimensional, non-isothermal, dynamic model of an open cathode, self-humidified PEMFC was developed. The model consists of three sub models using on energy, momentum and water mass balance of the system with respect to an anode, cathode channel, diffusion layers and MEA. The model is intended to be used to simulate and study the effects of water transport/distribution and its influence on the system performance to develop new water management control strategies. Essential coefficients for water transport, namely the water diffusion, EOD, and bulk specific heat capacity coefficients, have been determined experimentally. The effective water diffusion coefficient was determined to be 3.3×10−8m2 s−1 at 30ºC and increases by 3×10−10m2 s−1 per degree until 50ºC. The EOD coefficient was found to be 0.47 to 0.48 water molecules per proton at stack currents from 0.044 to 0.133Acm−2. The bulk specific heat capacity for one cell unit was determined to be 1260Jkg−1K−1. The model has been validated by using experimental data directly obtained from laboratory tests.
CitationStrahl, S.; Husar, A.; Serra, M. Characterization, development and experimental validation of a dynamic model of an open cathode PEM fuel cell. A: Congreso Nacional de Pilas de Combustible. "IV Congreso Nacional de Pilas de Combustible". Sevilla: 2010, p. 1-4.
URIhttp://hdl.handle.net/2117/12548
Publisher versionhttp://conappice2010.appice.es/app.php?p=publi
Collections
Share: