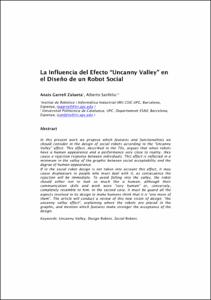 In this present work we propose which features and functionalities we should consider in the design of social robots according to the “Uncanny Valley” effect. This effect, described in the 70s, argues that when robots have a human appearance and a performance very close to reality, they cause a rejection response between individuals. This effect is reflected in a minimum in the valley of the graphic between social acceptability and the degree of human appearance. If in the social robot design is not taken into account this effect, it may cause displeasure in people who must deal with it, as consecuence the rejection will be immediate. To avoid falling into the valley, the robot should either not to look so much like a human, although their communication skills and work were "very human" or, conversely, completely resemble to him. In the second case, it must be guard all the aspects involved in its design to make humans think that it is "one more of them". The article will conduct a review of this new vision of design: “the uncanny valley effect”, explaining where the robots are placed in the graphic, and mention which features make stronger the acceptance of the design.
CitationGarrell, A.; Sanfeliu, A. La influencia del efecto "Uncanny Valley" en el diseño de un robot social. A: International Congress of Design and Innovation of Catalonia. "1st International Congress of Design and Innovation of Catalonia.". saBADELL: 2010, p. 84-95.
URIhttp://hdl.handle.net/2117/12547
ISBN9788493616519
Publisher versionhttp://www.esdi.es/continguts/publicacio.php?llengua=3&id_fitxa=108&opcio=llibres