A distance-based formulation of the octahedral manipulator kinematics 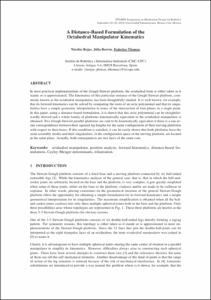 Document typeConference report
Rights accessOpen Access
Abstract
In most practical implementations of the Gough-Stewart platform, the octahedral form is either taken as it stands or is approximated. The kinematics of this particular instance of the Gough-Stewart platform, commonly known as the octahedral manipulator, has been thoughtfully studied. It is well-known, for example, that its forward kinematics can be solved by computing the roots of an octic polynomial and that its singularities have a simple geometric interpretation in terms of the intersection of four planes in a single point. In this paper, using a distance-based formulation, it is shown that this octic polynomial can be straightforwardly derived and a whole family of platforms kinematically equivalent to the octahedral manipulator is obtained. Two Gough-Stewart parallel platforms are said to be kinematically equivalent if there is a one-toone correspondence between their squared leg lengths for the same configuration of their moving platforms with respect to their bases. If this condition is satisfied, it can be easily shown that both platforms have the same assembly modes and their singularities, in the configuration space of the moving platform, are located in the same place. Actually, both consequences are two faces of the same coin.
CitationRojas, N.E.; Borras, J.; Thomas, F. A distance-based formulation of the octahedral manipulator kinematics. A: IFToMM Symposium on Mechanism Design for Robotics. "2010 IFToMM Symposium on Mechanism Design for Robotics". México DF: 2010, p. 1-12.
URIhttp://hdl.handle.net/2117/12545
Publisher versionhttp://www.up.edu.mx/Default.aspx?doc=22539
Collections
Share: