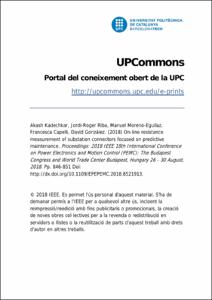 Capelli, Francesca
González, David
Document typeConference lecture
PublisherInstitute of Electrical and Electronics Engineers (IEEE)
Rights accessOpen Access
Abstract
To detect faults in their early stage in a substation, it is necessary to monitor, measure and analyze periodically the health condition of the electrical connectors, which are among the most critical devices in such installations. To do so, the electrical connector has to be combined with low-cost intelligent electronic devices (IED), including different sensor types and microcontrollers with wireless capabilities. Such an electrical connector is referred as SmartConnector. Using the data collected by the IED, it is possible to estimate accurately the current condition of the electrical connector in real-time, which in turn will determine the expected faults in the substation before a major failure occurrence. The electrical resistance plays a key role to determine the current health condition, and therefore to estimate the remaining lifetime of the electrical connector. The electrical resistance of a high-voltage substation connector is calculated in real-time using different methods proposed in this work, by using an analog-bipolar Hall effect sensor and an instrumentation amplifier. Experimental results, when compared with the standard 4-wire Kelvin method, show an error of less than 10%. Although the proposed methods have been validated for substation connectors, they can be applied to many other types of hardware with electrical contacts.
CitationKadechkar, A., Riba, J., Moreno-Eguilaz, J.M., Capelli, F., González, D. On-line resistance measurement of substation connectors focused on predictive maintenance. A: International Power Electronics and Motion Control Conference. "2018 IEEE 18th International Conference on Power Electronics and Motion Control (PEMC): proceedings: The Budapest Congress and World Trade Center Budapest, Hungary 26-30 August, 2018". Institute of Electrical and Electronics Engineers (IEEE), 2018, p. 846-851.
URIhttp://hdl.handle.net/2117/125364
DOI10.1109/EPEPEMC.2018.8521913
ISBN978-1-5386-4197-2
Publisher versionhttps://ieeexplore.ieee.org
Other identifiershttps://ieeexplore.ieee.org/document/8521913
Collections
Share: