Application of the 2D depth-averaged model, FLATModel, to pumiceous debris flows in the Amalfi Coast 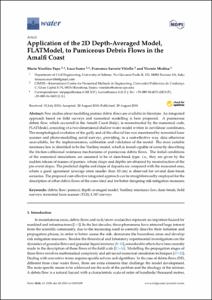 Document typeArticle
Rights accessOpen Access
Abstract
Few studies about modelling pumice debris flows are available in literature. An integrated approach based on field surveys and numerical modelling is here proposed. A pumiceous debris flow, which occurred in the Amalfi Coast (Italy), is reconstructed by the numerical code, FLATModel, consisting of a two-dimensional shallow-water model written in curvilinear coordinates. The morphological evolution of the gully and of the alluvial fan was monitored by terrestrial laser scanner and photo-modelling aerial surveys, providing, in a cost-effective way, data otherwise unavailable, for the implementation, calibration and validation of the model. The most suitable resistance law is identified to be the Voellmy model, which is found capable of correctly describing the friction-collisional resistance mechanisms of pumiceous debris flows. The initial conditions of the numerical simulations are assumed to be of dam-break type: i.e., they are given by the sudden release of masses of pumice, whose shape and depths are obtained by reconstruction of the pre-event slopes. The predicted depths and shape of deposits are compared with the measured ones, where a good agreement (average error smaller than 10 cm) is observed for several dam-break scenarios. The proposed cost-effective integrated approach can be straightforwardly employed for the description of other debris flows of the same kind and for better designing risk mitigation measures.
CitationPapa, M., Sarno, L., Vitiello, F. S., De Medina, V. Application of the 2D depth-averaged model, FLATModel, to pumiceous debris flows in the Amalfi Coast. "Water", 29 Agost 2018, vol. 10, núm. 9, p. 1159-1-1159-22.
URIhttp://hdl.handle.net/2117/125345
DOI10.3390/w10091159
ISSN2073-4441
Publisher versionhttp://www.mdpi.com/2073-4441/10/9/1159
Collections
Share: