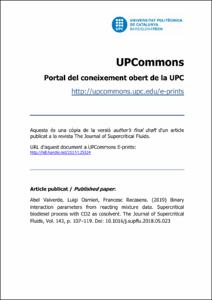 Document typeArticle
Rights accessOpen Access
All rights reserved. This work is protected by the corresponding intellectual and industrial property rights. Without prejudice to any existing legal exemptions, reproduction, distribution, public communication or transformation of this work are prohibited without permission of the copyright holder
Abstract
A method is presented for the calculation of binary interaction parameters from reacting mixture data. The process studied is the supercritical methanol transesterification of triolein with CO2 as cosolvent. The reaction proceeds through 3 reversible reactions in series, on a solid catalyst (Nafion® SAC-13), for which the kinetics is known. To describe the reactor performance, the kinetic constants and the binary interaction parameters for the Peng-Robinson equation of state, are necessary, and were included in the reactor model. Previously published view-cell observations and thermodynamic calculations indicate that no condensation occurs in the reactor. Kinetic and thermodynamic parameters were determined by a global optimisation procedure. From the rate constants obtained, the process exhibits some reversibility, despite the excess of methanol used. Our methodology allows to obtain the binary interaction coefficients for the intermediate reaction species (dioleins and monooleins) that were unavailable so far. The method is sensitive to the errors in the measured concentrations
CitationValverde, A., Osmieri, L., Recasens, F. Binary interaction parameters from reacting mixture data. Supercritical biodiesel process with CO2 as cosolvent. "The Journal of supercritical fluids", 1 Gener 2019, vol. 143, p. 107-119.
URIhttp://hdl.handle.net/2117/125324
DOI10.1016/j.supflu.2018.05.023
ISSN0896-8446
Publisher versionhttps://www.sciencedirect.com/science/article/pii/S0896844618302560
Collections
Share: