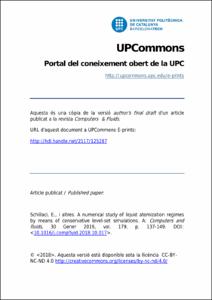 Except where otherwise noted, content on this work is licensed under a Creative Commons license : Attribution-NonCommercial-NoDerivs 3.0 Spain
Abstract
In this work, a conservative level-set finite-volume solver for interface-capturing is employed to perform the direct numerical simulation of Liquid Jets discharging into a quiescent air chamber. The scope is to propose a complete break-up regimes map entirely obtained from numerical simulations. The solver accounts for an adaptive mesh refinement strategy to optimize the computational resources. The numerical model is firstly validated in the context of 3D atomization by simulating the behavior of 3D Coaxial Liquid-Air Jets. Next, we propose an overview of the physical behavior of Liquid Jets, mainly proceeding from theoretical and experimental works. Hence, we perform a series of simulations aimed at studying the variability of the Liquid Jet characteristics as function of selected input parameters. In particular, the analyzed cases are characterized by variable values of Reynolds, Ohnesorge and Weber numbers. The patterns obtained in simulations are compared to the ones expected from bibliographic studies, situating each case on a break-up regime map. A general good agreement is found in the identification of the various break-up regimes and characteristic lengths, while the major differences have been highlighted and interpreted.
CitationSchillaci, E., Antepara, O., Balcazar, N., Rigola, J., Oliva, A. A numerical study of liquid atomization regimes by means of conservative level-set simulations. "Computers and fluids", 30 Gener 2019, vol. 179, p. 137-149.
URIhttp://hdl.handle.net/2117/125287
DOI10.1016/j.compfluid.2018.10.017
ISSN0045-7930
Publisher versionhttps://www.sciencedirect.com/science/article/pii/S0045793018307801
Collections
Share: