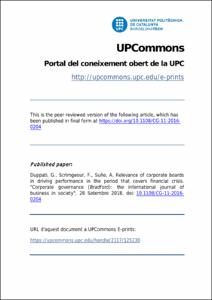 Document typeArticle
Rights accessOpen Access
Abstract
Purpose: This paper aims to examine the relevance of boards in driving firm level performance. For this purpose, it considers firms listed on Ireland and Spain stock exchanges for the period 2005 to 2014, over a period that includes the global financial crisis. Design/methodology/approach: This study uses panel data regression analysis to analyse the effects of board characteristics on performance and also uses alternate model specifications to test the significance of robustness of relationships. Findings: The impact of board size on performance is negative and significant for Irish and Spanish firms for the study period. In general, the board independence has a positive effect on the performance of Spanish firms for the complete study period and suggests consistency with the resource dependency theory. Research limitations/implications: The analysis suggests that in general, the non-executive and the board size do not affect the corporate performance of Irish and Spanish firms during the financial crisis. The fixed effects model suggests positive effects of gender diversity on performance for Spanish firms, while the random effects indicates negative relationship between gender diversity and performance for Irish companies. Practical implications: The evidence on the Spanish firms suggests that female representation on the boards may be critical during the financial crisis Social implications: The quota legislation on female board representation in Spain is yielding superior results over the soft law approach by Irish firms during the times of financial crisis period. Originality/value: This study contributes to the literature on the corporate governance practices and performance of two countries that were strongly affected by the crisis in the European Union. As governments increasingly contemplate board gender diversity policies, this study offers useful empirical insights on Spanish and Irish firms.
Location
1: Irlanda
2: Espanya
CitationDuppati, G., Scrimgeour, F., Suñe, A. Relevance of corporate boards in driving performance in the period that covers financial crisis. "Corporate governance (Bradford): the international journal of business in society", 2019, Vol. 19, núm. 2, p.321-338
URIhttp://hdl.handle.net/2117/125230
DOI10.1108/CG-11-2016-0204
ISSN1472-0701
Publisher versionhttps://www.emeraldinsight.com/doi/abs/10.1108/CG-11-2016-0204
Collections
Share: