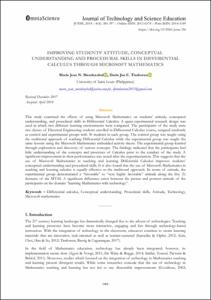 Show full item record
Mendezabal, Marie Jean
Tindowen, Darin Jan
Document typeArticle
PublisherOmniaScience
Rights accessOpen Access
Abstract
This study examined the effects of using Microsoft Mathematics on students’ attitude, conceptual understanding, and procedural skills in Differential Calculus. A quasi-experimental research design was used in which two different learning environments were compared. The participants of the study were two classes of Electrical Engineering students enrolled in Differential Calculus course, assigned randomly as control and experimental groups with 30 students in each group. The control group was taught using the traditional approach of teaching Differential Calculus while the experimental group was taught the same lessons using the Microsoft Mathematics embedded activity sheets. The experimental group learned through exploration and discovery of various concepts. The findings indicated that the participants had little understanding of the concepts and processes of Calculus prior to the conduct of the study. A significant improvement in their performances was noted after the experimentation. This suggests that the use of Microsoft Mathematics in teaching and learning Differential Calculus improves students’ conceptual understanding and procedural skills. It is also found that the use of Microsoft Mathematics in teaching and learning calculus is equally effective as the traditional approach. In terms of attitude, the experimental group demonstrated a “favorable” to “very highly favorable” attitude along the five (5) domains of the MTAS. A significant difference exists between the pretest and posttest attitude of the participants on the domain “learning Mathematics with technology”
CitationMendezabal, M. J.; Tindowen, D. J. Improving students' attitude, conceptual understanding and procedural skills in differential calculus through Microsoft Mathematics. "JOTSE: Journal of Technology and Science Education", Setembre 2018, vol. 8, núm. 4, p. 385-397.
URIhttp://hdl.handle.net/2117/125198
DOI10.3926/jotse.356
DLB-2000-2012
ISSN2013-6374
2014-5349
Collections
Share: