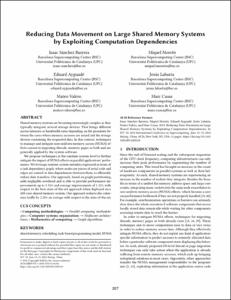 Shared memory systems are becoming increasingly complex as they typically integrate several storage devices. That brings different access latencies or bandwidth rates depending on the proximity between the cores where memory accesses are issued and the storage devices containing the requested data. In this context, techniques to manage and mitigate non-uniform memory access (NUMA) effects consist in migrating threads, memory pages or both and are generally applied by the system software. We propose techniques at the runtime system level to further mitigate the impact of NUMA effects on parallel applications' performance. We leverage runtime system metadata expressed in terms of a task dependency graph, where nodes are pieces of serial code and edges are control or data dependencies between them, to efficiently reduce data transfers. Our approach, based on graph partitioning, adds negligible overhead and is able to provide performance improvements up to 1.52× and average improvements of 1.12× with respect to the best state-of-the-art approach when deployed on a 288-core shared-memory system. Our approach reduces the coherence traffic by 2.28× on average with respect to the state-of-the-art.
CitationBarrera, I., Ayguade, E., Valero, M., Moreto, M., Labarta, J., Casas, M. Reducing data movement on large shared memory systems by exploiting computation dependencies. A: International Conference on Supercomputing. "ICS'18: 2018 International Conference on Supercomputing: Beijing, China: June 12-15, 2018". New York: Association for Computing Machinery (ACM), 2018, p. 207-217.
URIhttp://hdl.handle.net/2117/125137
DOI10.1145/3205289.3205310
ISBN978-1-4503-5783-8
Publisher versionhttps://dl.acm.org/citation.cfm?id=3205310