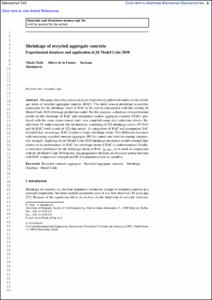 Marinkovic, Snežana
Document typeArticle
Rights accessOpen Access
Abstract
This paper describes a meta-analysis of previously published studies on the shrinkage strain of recycled aggregate concrete (RAC). The study aims at providing an analytic expression for the shrinkage strain of RAC to be used in conjunction with the existing fib Model Code 2010 shrinkage prediction model. For this purpose, a database of experimental results on the shrinkage of RAC and companion natural aggregate concrete (NAC), produced with the same water-cement ratio, was compiled using strict selection criteria. Results from 19 studies entered into the database, consisting of 125 shrinkage curves (39 NAC and 86 RAC) with a total of 424 data points. A comparison of RAC and companion NAC revealed that, on average, RAC displays a larger shrinkage strain. This difference increases with increasing recycled concrete aggregate (RCA) content and with decreasing compressive strength. Applying the fib Model Code 2010 shrinkage prediction model revealed that, relative to its performance on NAC, the shrinkage strain of RAC is underestimated. Finally, a correction coefficient for the shrinkage strain of RAC, ξcs,RAC, to be used in conjunction with the fib Model Code 2010 model, was proposed in the form of a bivariate power function with RAC compressive strength and RCA replacement ratio as variables.
Description
The final publication is available at Springer via http://dx.doi.org/10.1617/s11527-018-1258-0
CitationTošić, N., de la Fuente, A., Marinkovic, S. Shrinkage of recycled aggregate concrete: experimental database and application of fib Model Code 2010. "Materials and structures", Octubre 2018, vol. 51, núm. 5, p. 1-16.
URIhttp://hdl.handle.net/2117/125120
DOI10.1617/s11527-018-1258-0
ISSN1359-5997
Publisher versionhttps://link.springer.com/article/10.1617/s11527-018-1258-0
Other identifiershttps://www.researchgate.net/publication/327800137_Shrinkage_of_recycled_aggregate_concrete_experimental_database_and_application_of_fib_Model_Code_2010
Collections
Share: