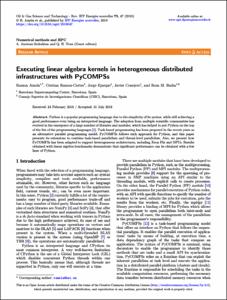 Document typeArticle
PublisherEDP Open
Rights accessOpen Access
European Commission's projectTANGO - Transparent heterogeneous hardware Architecture deployment for eNergy Gain in Operation (EC-H2020-687584)
Abstract
Python is a popular programming language due to the simplicity of its syntax, while still achieving a good performance even being an interpreted language. The adoption from multiple scientific communities has evolved in the emergence of a large number of libraries and modules, which has helped to put Python on the top of the list of the programming languages [1]. Task-based programming has been proposed in the recent years as an alternative parallel programming model. PyCOMPSs follows such approach for Python, and this paper presents its extensions to combine task-based parallelism and thread-level parallelism. Also, we present how PyCOMPSs has been adapted to support heterogeneous architectures, including Xeon Phi and GPUs. Results obtained with linear algebra benchmarks demonstrate that significant performance can be obtained with a few lines of Python.
CitationAmela, R. [et al.]. Executing linear algebra kernels in heterogeneous distributed infrastructures with PyCOMPSs. "Oil and Gas Science and Technology", 24 Octubre 2018, vol. 73, núm. 47, p. 1-17.
URIhttp://hdl.handle.net/2117/125116
DOI10.2516/ogst/2018047
ISSN1294-4475
Publisher versionhttps://ogst.ifpenergiesnouvelles.fr/articles/ogst/full_html/2018/01/ogst180064/ogst180064.html
Collections
Share: