Towards cavity enhanced detection of single ions in the solid-state 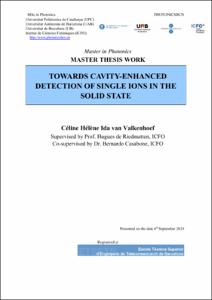 Show full item record
Van Valkenhoef, Céline Hélène Ida
Tutor / directorRiedmatten, Hugues de; Casabone, Bernardo
Document typeMaster thesis
Rights accessOpen Access
All rights reserved. This work is protected by the corresponding intellectual and industrial property rights. Without prejudice to any existing legal exemptions, reproduction, distribution, public communication or transformation of this work are prohibited without permission of the copyright holder
Abstract
The goal of this master thesis was to take initial steps towards cavity-enhanced detection of single rare-earth ions in the solid state. A fibre microcavity set-up for use with Praseodymium-doped nanocrystals was designed, built and characterised with light at 606 nm, with the aim to achieve Purcell enhancement. The cavity has a finesse of 3374, linewidth of 14 GHz and FSR of 80 THz. In addition, fluorescence and linewidth measurements of Er3+:Y2O3 nanocrystals at room temperature were taken in the telecom range. A primary fluorescence peak at 1535.424 nm with FWHM of 171 GHz was observed, corresponding to the Er3+:4I13/2 ? 4I15/2 transition, and a secondary peak at 1536.851 nm. A population decay time T1 of 13.3 ms was measured.
Description
Entanglement between single spins and photons is an important resource in quantum information science, e.g. in quantum networking. Rare-earth ions in dielectric crystals have emerged as a promising candidate for this task. Rare-earth ion doped solids have been used so far mostly as ensemble-based quantum memories. However, they also feature promising properties for single ion detection and manipulation, such as long-lived spins, narrow optical transitions and preservation of coherence properties when inserted in nanostructures. Because of the long lifetimes of the optical t
SubjectsSpectroscope, Ions, Quantum theory, Espectroscopis, Ions, Quàntums, Teoria dels
URIhttp://hdl.handle.net/2117/125084
Collections
Share: